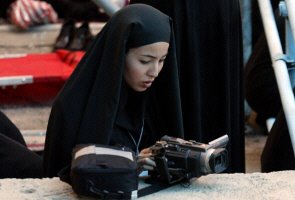 1,000,000 Green Envelopes Needed to be Sent to Iranian Embassies & U.N. from Around the World

Nashville, TN. / Teheran, Iran. May 7, 2009. Roxana Saberi is an Iranian-Japanese descendant, a female freelance journalist, and an U.S. citizen and Iranian citizen, who often covers according to different sources and Christian Newswire the conditions and plight of women in Iran. She was arrested in February 2009, and is currently being held in the notorious Evin prison close to the city of Teheran in Iran.

Roxana Saberi has been sentenced to eight years in prison, after a closed quick and even baseless “trial”. For twelve days she has been on a hunger strike.

Roxana (31) has covered many stories on the welfare of women in Iran, highlighting stories that cover the conditions that they deal with there. Roxana Saberi, who holds dual Iranian-American citizenship, was tried in the Revolutionary Court, which usually hears cases involving national security.

Roxana Saberi had worked as a freelance reporter for several news organizations including National Public Radio and the British Broadcasting Corporation.

On their web site the association is calling all citizen and women of the world to participate the 1,000.000 Green Envelope Campaign to send an instant email to the Iranian embassies around the world and the United Nations representation with the brief message that states “RELEASE ROXANA SABERI, PLEASE.”

In addition to e-mailing the Iranian representation and embassies the association wants to get 1,000,000 green envelopes sent to the embassies and the United Nations (UN) with the following message inside:

“RELEASE INNOCENT ROXANA SABERI, PLEASE !” – send to the Iranian embassy in your country, such as the United States of America, United Kingdom, Mexico, France, Spain, European Union, Russia or any other country in this world.

The plan is to bombard the Iranian embassies across the world with green envelopes that say: “RELEASE ROXANA SABERI, now, please.” to send respectfully a clear and firm message that an innocent journalist must be released.

It is also recommended to leave a comment on Iranian President Mahmoud Ahamdinejad´s blog on www.ahadinejad.ir/en and to ask him respectfully for the RELEASE OF INNOCENT ROXANA SABERI.

People can send also a respectful note petitioning to the supreme leader of Iran, the Ayathollah Ali Khamenei on www.leader.ir/langs/en/index.php?p=letter .

Governments may use diplomatic means but that only goes so far as we have seen. As united world citizens we can make together a difference !

An international coalition of world citizens corporately, can have a huge effect on political actions and move decisions.

All women, reporters, media agencies, non-profit, religious, or women´s organizations, corporations who conduct business in Iran and anyone concerned about human and women´s right from around the world is requested to participate the international 1,000.000 Green Envelope Campaign To Free Roxana Saberi.

What else people might do to free the innocent journalist Roxana Saberi?

Call the representatives by phone or sign one of many petitions such as on Facebook or on petitiononline.com and many other place around the world.

More details can be found on www.girlsagainstporn.com/free_roxana

Andreas Klamm is a French-German journalist, broadcast journalist, TV producer, radio producer and film producer and author of seven books since 1984. He is working in the United States of America, United Kingdom, Belgium, France, and Germany and also as managing editor and a news correspondent of MJB Mission News, ISSN 1999-8414 and Liberty and Peace NOW! Human Rights Reporters. More information available on www.andreas-klamm-books.de.be and www.libertyandpeacenow-online.de.be